Utah: the book of Mormons

From feast to famine. Or Vegas to Utah. Or slack-jawed mouth breathers to wholesome god botherers. Whichever, we left Vegas via the gym (another example of why we're never going to be Vegas lovers) and headed East through Nevada, a bit of Arizona and into Utah.

Proper cowboy scenery for hours and hours of driving. We might have passed the odd truck but that was about it. After the sensory abuse of LV it was fantastic. We stayed in a one horse town called Tropic. Like something out of Little house on the Prairie - all log cabins and churches that looked like they could be blown down with a decent side wind. Our motel was a Mormon establishment (as are about 80% in the state) so we checked in with our 'just married, haven't had time to change the passport' excuse ready. 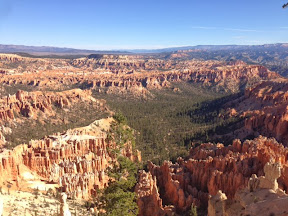 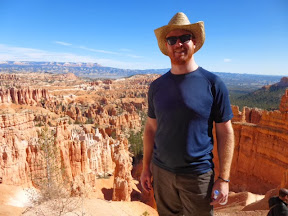 I loved Utah. Aside from the scenery I found the people simple and honest which is fortuitous as their mantra is 'live simply and healthily' (as the numerous car stickers remind you). Women don't bother with the vanities of make up, hair products, heels or waists, and the menfolk sport big beards. Right now, we fitted in quite nicely!
Everywhere we turned there were stacks of the Book of Mormon to help yourself to (we didn't - both reading Lionel Shrivers latest which I suspect to be more entertaining and a bit less god-dy) and as the state shuts on Sunday for church we did find ourselves forced into a simple and healthy life when we left a state park and realised there was just us and the tumbleweed kicking around. We had a quiet afternoon of reflection ( for which read planning the rest of our time in the US. Mormons have good wifi & no-one else was using any bandwidth on the sabbath)

While we were there we visited Bryce Canyon and walked through some other-worldly scenery. A mixture of fault line movement and sandstone erosion has created thousands of 'hoodoo's' - towering layered rocks that are constantly changing shape each time the elements wash away a bit more. We were leaning back and admiring the view following a descent/climb hike when we heard a domestic tourist advising his fellow sight-seers not to bother walking further that the viewing point as it's 'just more of this rock stuff'. True in a sense but I'm not sure where else in the world has similar 'rock stuff'. 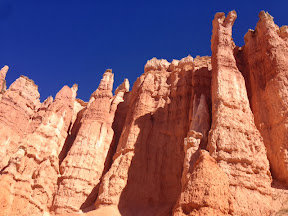 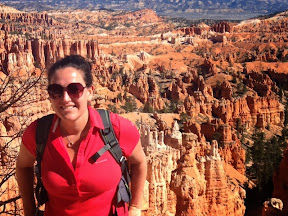 Then onto Zion National Park where we climbed up to Angels Landing. I bottled the last 1/2 mile and left Chris to it. So glad I did as I watched others come down in tears having frozen with fear and being coaxed down by well-meaning but precariously balanced strangers. Chris continued to the top using the metal chain for stability over one-steps width of rock with a 3000ft drop either side. Mentalist. 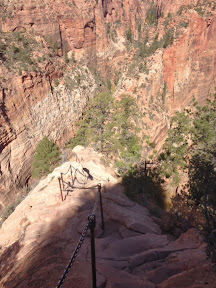 Another big plus point for Utah - they do salads. We had the healthiest food we've had since arriving there and despite their abstinence, they do serve booze to tourists as Chris sampled. Note the branding: Polygamy Porter.why have just one?. Nice. 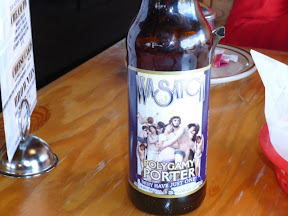 As the US is now fully open again, some big drives ahead to try and catch up with stuff we intended to in the first week so from Zion we headed West. After several hours driving through Arizona, Nevada, Area 51 (a nuclear testing site so close to Vegas I can't help but think they're missing a trick) & back into California what we really wanted was a motel that smelt like sewage, with nothing around bar an old casino 7 miles away. Luckily we found exactly that so after a slap up meal of luke-warm burrito/burger we joined the bedbugs for some kip.

A hearty breakfast of dry toast later, we hit the road again. Until now I thought my scathing review of Forest Mere Champneys would be the most damning trip advisor review I wrote. How things have changed!

10 hours of driving later - through Death Valley, Sierra Nevada and Yosemite, must have covered several flights-worths of elevation from 100ft below sea level to 9000ft above, dust filled desert to snow topped mountains- we've arrive in Oakhurst (just South of Yosemite) & are staying put for a few days exploring the big trees, El Capitaine & The Half Dome.

- Posted using BlogPress from my iPad