Little leg stretch around the canyons

15th October
13 miles walking the southern rim of the Grand Canyon today was brilliant fun. Saw deer, chipmunks, elk (given I've been known to do huge detours because of cows, walking past Elks with their big antlers did not please me!) lizards, condors, and a tarantula having a stroll himself at Hermits Rest 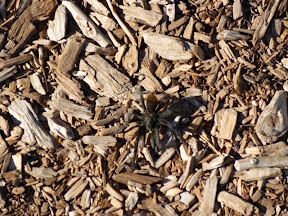 Everyone knows what it looks like so I won't bother trying to describe it but we were both very impressed and what would normally have taken us 3 hours took most of the day due to gawping stops. 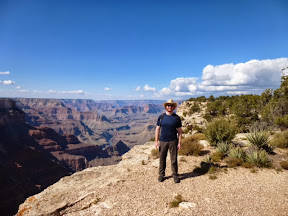 We've read up on all the rangers advice around wildlife:
- Don't antagonise the Elks as they're particularly aggressive in Sept/Oct (no elaboration as to what aggravates an elk)
- Most snakebites are down to people trying to handle them .. wtf?! Darwinism at best surely. If you're stupid enough to handle a rattlesnake you have no place here.
- Careful where you put your hands as scorpions are the same colour as the rocks. They will also climb into your pockets/bags/sleeping bags for warmth.
- Altitude makes you a bit mad so don't wander off the trails on your own.

That and posters telling you how many people have been rescued from 'the depths of the canyon' each year could give the idea they don't want people getting out the tour buses. With that in mind we're descending into the basin tomorrow - not the whole way down, about 3000ft. Neither of us have ever a hiked at altitude so playing it safe for this route. And so to bed (soon), early to rise and face the elks, scorpions, spiders and snakes....

16th Oct
Hiked the Bright Angel trail down to Plateau point & back today. Avoided any of the aforementioned creatures, in fact saw nothing more than ravens & lizards (and a few cheeky squirrels trying to break into some monks' backpacks). Round trip was exhausting but well worth it. In the basin the temperature is up to 30 degrees (f) hotter than on the rim, it's completely silent & incredibly beautiful. Not until we got to Plateau Point can you hear anything other than the occasional cricket & bird, at the Point you can see & hear the rapids in the Colorado river below. Not sure our photos really do it justice but being in the canyon gives a very different perspective. 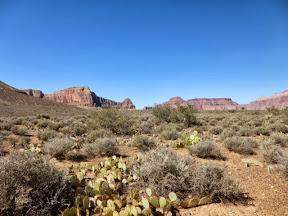 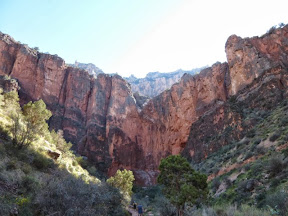 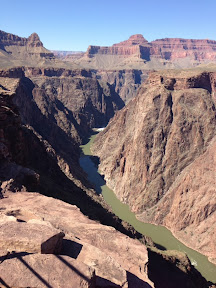 The climb back up was ok for the first few hours but the last 1000ft was a killer. Lactic acid on overdrive, lung capacity started to feel like they were running on 50%, and I (G) got a pounding headache like my skull was too small for the contents! 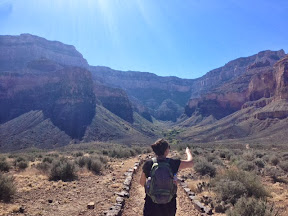 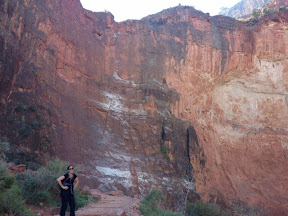 Whole trip took us about 7 hours (not the 9-12 hours the scaremongering advice in the ranger centre said) & so far has been the highlight of our trip.

Back to the motel for a glamorous night of laundry & burritos before crashing out in a leg-twitching exhausted heap.


- Posted using BlogPress from my iPad