Santa Cruz. It's not that far

11th Oct 2013
As the mean folks of America don't want their fellow Amurcans to have health care the shut down continues and all national parks are out of bounds. We're reading other travellers blogs and in Death Valley rangers have been stopping people even getting out their cars for photo shoots so doesn't seem a great gamble to drive out there only to keep going. Instead we're heading south down the coast in the hope that after a few days of seasides government will get their act together.
Next stop Santa Cruz then. C drove us out of SF so all I had to do was map read. Along with lathe work, heavy lifting and working remote controls navigation is a known strength of mine so we were out of the city in no time at all*
Headed down Route 1 to Santa Cruz where we stopped for lunch & happened upon a pod of humpback whales really close to the end of the pier. Stunning if not a bit overwhelming to see such massive creatures feeding so close to shore. The seals and porpoises didn't get much attention as a result. Santa Cruz is very nice - feels a bit like time travelling back to the 60s. The old boardwalk has been modernised sympathetically but was (thankfully) closed in Oct so we got the scenery without the screaming kids. In their place were hippy kids of all ages mulling around making paper flowers & flying kites. As you do. 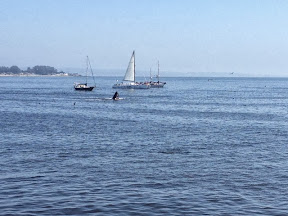 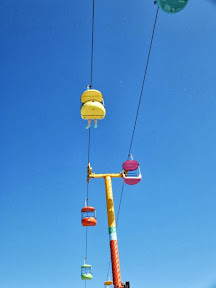 From there to an all American experience of staying in a roadside motel in a little place called Seaside (The only place on the coastal route to call itself that and not be) and dinner in a plastic fantastic sports bar. 28 screens all showing a different sport, all with the sound turned up. Food was mostly fried chicken in different sized baskets so I had Merlot instead. Not a night to be repeated in a hurry but interesting none the less. Lots of white and blue collar types dressed up for a night out, all age ranges, all bellowing support at their chosen sport irrespective of what the person sat next to them was watching. The table next to us were going bonkers over a game of online poker!
Walking home we noticed that we really are the only walkers - not sure if this means the other diners are good at having a designated driver or if the local police are quite tolerant of drink driving. Or maybe, not having the pleasures of residing at the Thunderbird Motel (empty pool included) they'd travelled further afield for their 48 buffalo wings.
On to Monterey - nice enough old whaling town with some old shizzle to look at. Inadvertently joined in with a charity walk for Alzheimer's who loved C and shouted Ginger Snap at him repeatedly. Chris loved it and high-5'd them all, started a chant of 'when I say Ginger, you say Snap' the whole route** A lot of them were wearing comedy ginger wigs & had stickers on their T's saying 'I love gingers'. googled it later and the local woman they were walking in memory of was a red head nicknamed Ginger Snap so being singled out by hundreds of strangers came from a place of love.
Two things of note - firstly the massively fat kid in an electric wheelchair who'd decided his skills were better used in driving alongside the walkers playing them tunes from his boom box than getting off his fat ass and walking with them. Being the possessor of arms he could have carried his boom box and still provided he ents, although this would have restricted his taffy eating hand. Secondly, the distance they were enduring (& I hope Sibling reads this before her half marathon next week and thinks on). 3 miles. It was a humbling morning.
At the end of the walk there was a little fete thing with a Survivalist stand selling everlasting cakes/beans/chicken-lengths for when the zombies/rapture/immigrants come. The whole Survivalist thing is interesting in itself but targeting people with Alzheimer's struck me as misplaced segmentation.
Drove the very scenic and famous wiggly cliff top bit of Route 1 down to Pismo Beach. Not sure if that was the best road for my first ever overseas driving foray but we got there. 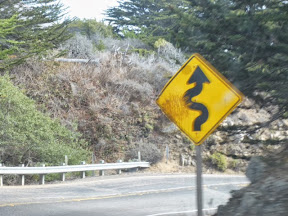 Onto Pismo beach for 2 nights. There's talk of Arizona self-funding the opening of the Grand Canyon Park so will explore the coast a bit more then see if we can head inland.
* quite a long time as I took us down a parallel road to a fast one. Ours had stop signs about every 25m. On the plus side though C got used to the controls quite quickly. Although it being an automatic there are only 2 settings.
** never happened.
- Posted using BlogPress from my iPad