So after a very tight journey to the airport (Thanks TFL for putting the wrong destination info on the platforms) we checked in with 4 mins to spare & tear-arsed across Heathrow. barely had time to throw a few Valium down before we were airborne.

Thanks to said valium, red wine & a very uneventful flight we landed in San Fran, got the train to our hotel and were out seeing the area by 6 pm.

2 further days in SF did all the usual. - nob hill, china town, north beach, telegraph hill bla bla...
The wharfs were predictably plastic and to be avoided - unless you wanted to drink/eat your own body weight in sugars in which case they're the perfect venue - but the areas further in town, particularly the hill dweller houses were great. Jet lag meant we started the day at 5am so were a bit mental by the afternoon. Got the cable car home ( the driver as happy, if not more, than me to be about his daily toil) & became aware of the fact our hotel was in the middle of The Wire territory. Perfect if you wanted meth, otherwise not so much. That is what you get for trying to do North America on backpacking budgets. 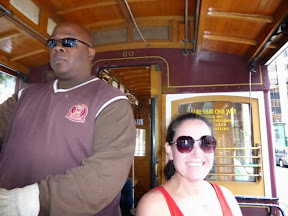 Anyway, meth procured we set about not seeing Alcatraz (Thanks Republicans). Instead we went on a boat trip to the edge of Alcatraz (let's have a look at what you could've won...) and around the bay. best of the situation really. Slightly odd gesture of US service that they refunded our tickets and gave us complimentary pics of the two of us stood against a garishly coloured backdrop of Alcatraz - odd because we were taken behind a screen for said photo. The other side of the screen (and where we then walked out to) was the real Alcatraz. Clearly not photogenic enough compared to its day-glo mural! Will send pics home if we ever spot a post office as they won't survive in my rucksack.

From there we walked 9 miles along the waterfront & across the Golden Gate bridge where I moaned for hours that my new travellers knickers were the most uncomfortable things known to woman. The bridge is notoriously windy of course & C was sporting a Jedward/Doubletake brother do by the time we finished. Strong look but barely noticeable in this city. Other than my whinging & the pollution inhaled on the bridge great day. impressive structure, great scenery , good leg stretch & topped off with a ruby for dinner. 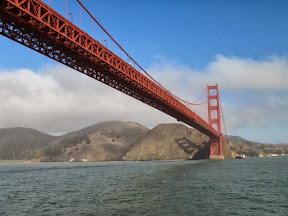 Overall thoughts on San Fran - as pretty, multi-cultural & bohemian as expected. chilled for a city & fair play to the people who decided back in the day to drop out & live off weed (without any nonsense about higher plains/spirituality - just good old fashioned hippies)- They do no harm and society doesn't seem to object to their choices either. The whole tolerance thing is very nice to be amongst - all of the US thinks this way yes?

That evening discovered there was nothing wrong with my new underwear that wearing them the right way around wouldn't fix. Clearly jet lag not quite over. 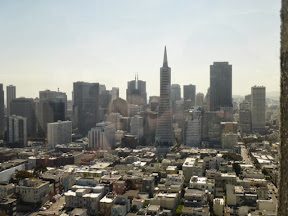